After watching Narcos on Netflix, Gravel Alliance rider Sofiane Sehili wasn’t sure what to expect from Colombia, but it took just one week for the endurance addict to fall in love with this Latin American nation. Known for churning out climbing talent on the tarmac like nowhere else, Sofiane set out to discover if Colombia flexes just as much gravel might as its mountainous terrain suggests.

Now back in Paris after his high altitude antics, Sofiane sat down to digest this Colombian climbing frenzy. Here’s his story: 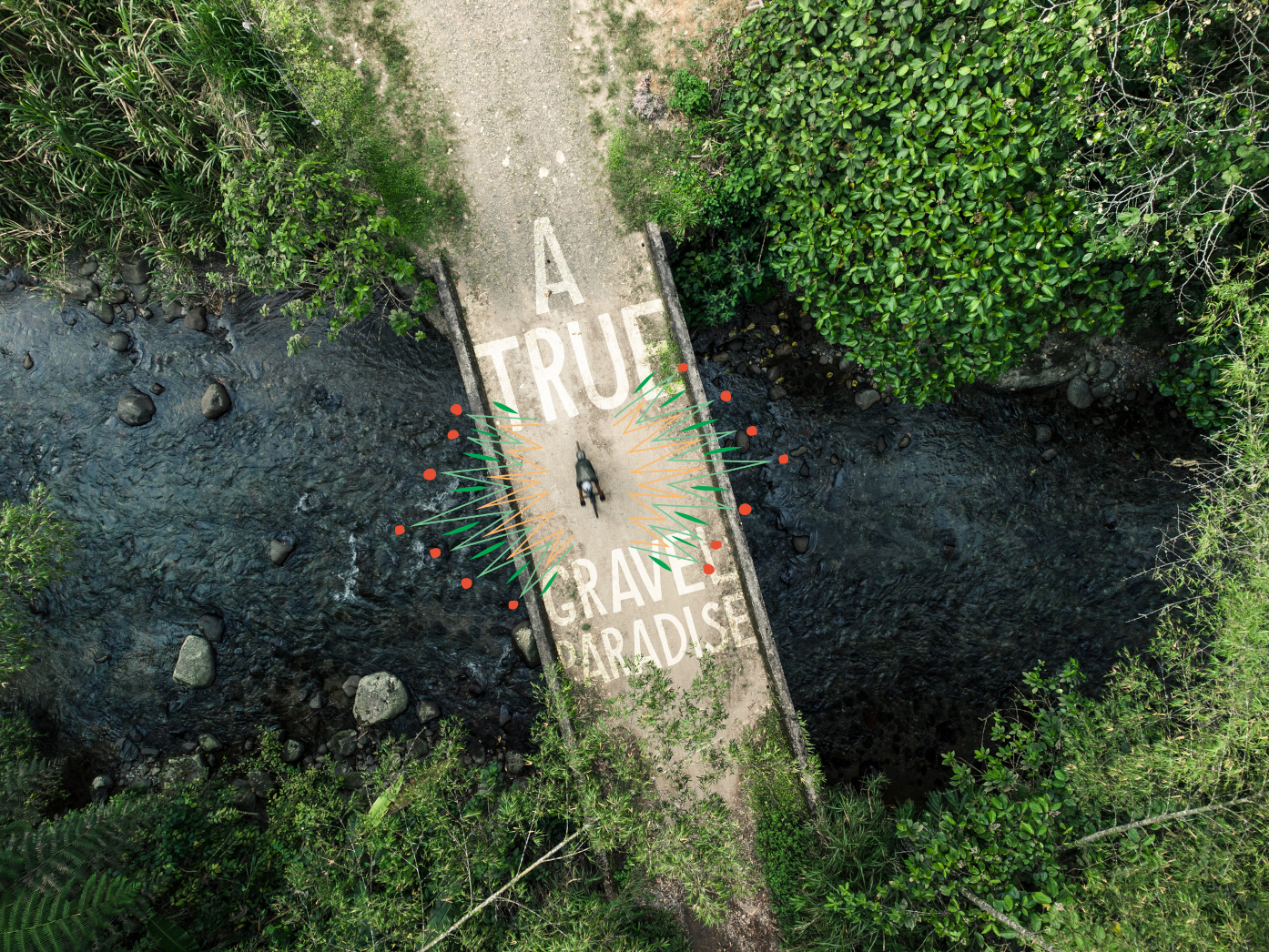 Getting high in Colombia

I first went biketouring in Colombia in 2019 to prepare for the Inca Divide ultracycling race. My goal was to acclimatize to high altitude before racing in Peru, where I would be tackling climbs up to 5,000 metres above sea level. At that time, the extent of my Colombia knowledge amounted to what I’d see while watching the Netflix show, Narcos—and while it's arguably a great show, it is unlikely to make you want to jump on the next plane to Bogota. 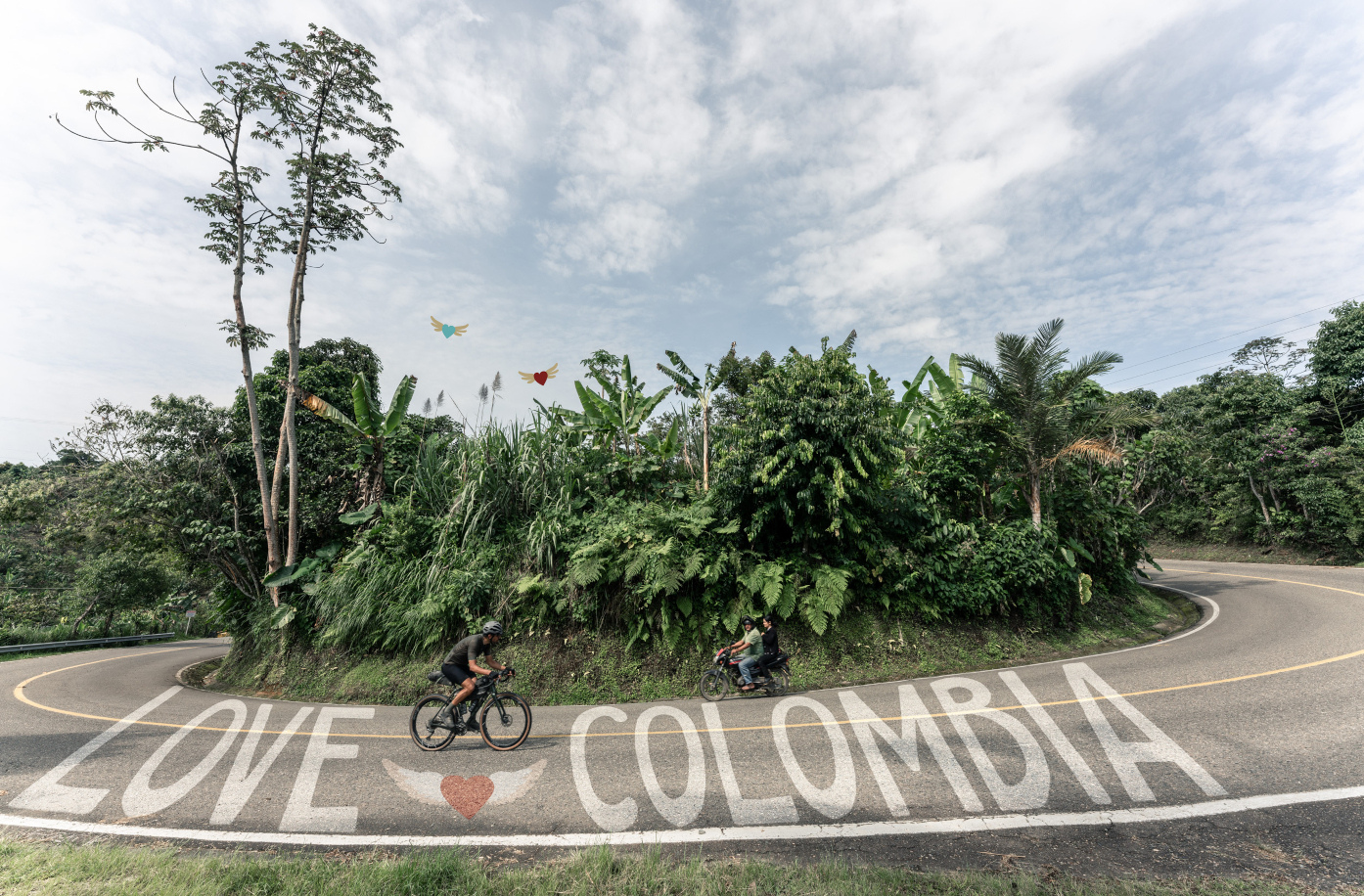 It took me about a week to fall in love with Colombia. That's basically the time it took me to ride from the hot and humid coastal city of Cartagena to the cool summits of the Boyacá department. I spent two weeks exploring two of the three ranges of the Andes that run across the country, but unfortunately, I had to leave as the race was about to start. As I crossed the border to Ecuador on my way to Peru, I promised myself I would come back soon to tackle some more giant gravel climbs.

Due to the pandemic and a gnarly injury, it took much longer than expected for me to go back. But finally, the planets aligned in spring 2022, and I found myself boarding a flight to Bogota. I was eager to return to the places I had fallen in love with and impatient to discover new ones that would undoubtedly be as stunning. 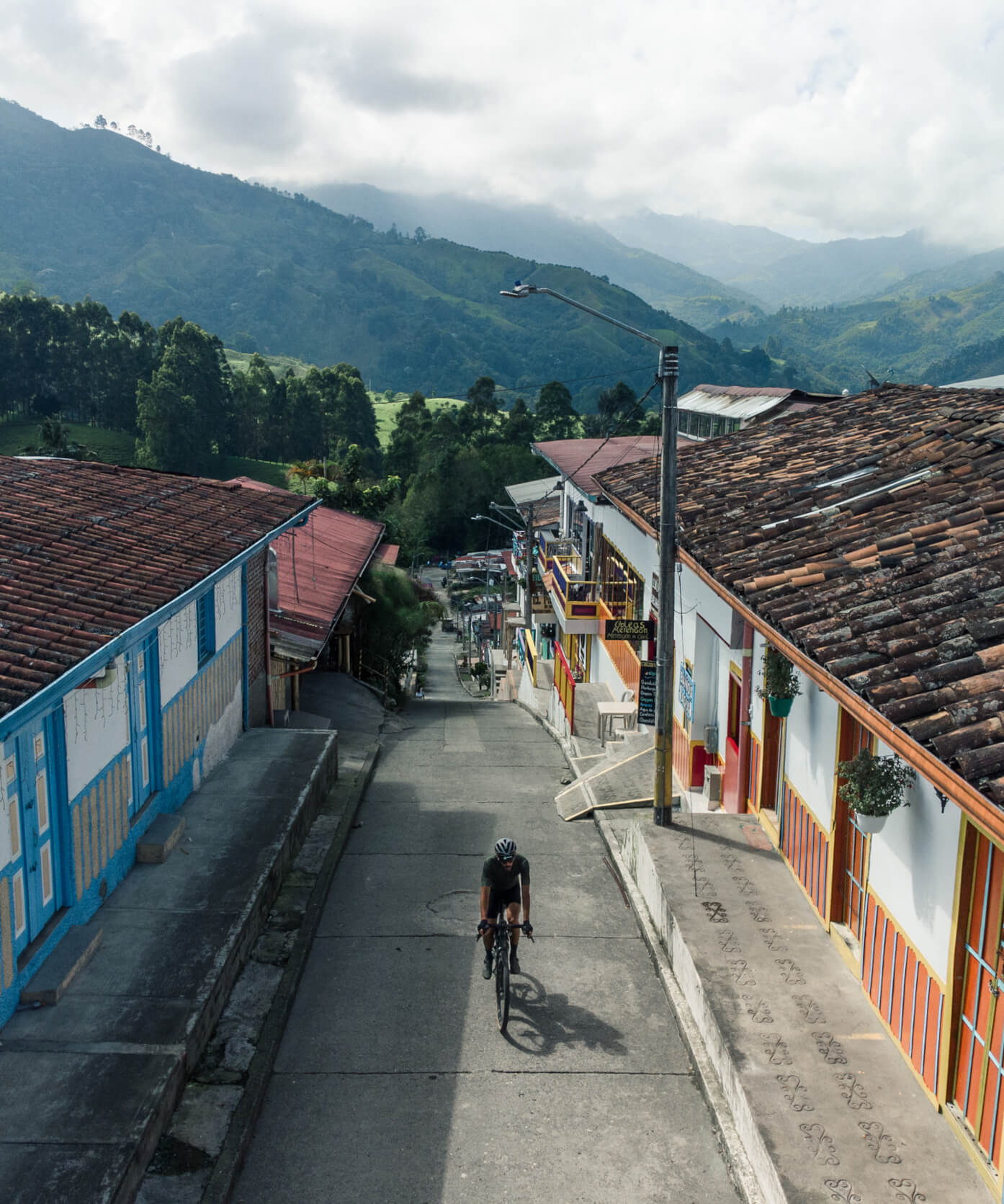 Still jet-lagged, I eased into my trip with an almost fully paved ride to a small town about 90 km from the capital. With Bogota sitting high in the Andes at 2,600m of altitude, it would have been ill-advised for a Parisian coming from sea level to start the journey with a challenging ride and I suspected it would not take long for the going to get really tough – and I wasn’t wrong. The gravel fest began on day 2 as soon as I left the village of Suesca. No mega climbs just yet, but the consecutive short, steep hills made the going fairly slow, especially as my body had not yet had time to adapt to the high altitude.

At the end of the day, I made it to Villa de Leyva, the capital of the department of Boyacá, which has the highest average altitude in all of Colombia. This was it. Within two days, I’d already found myself right where I wanted to be. 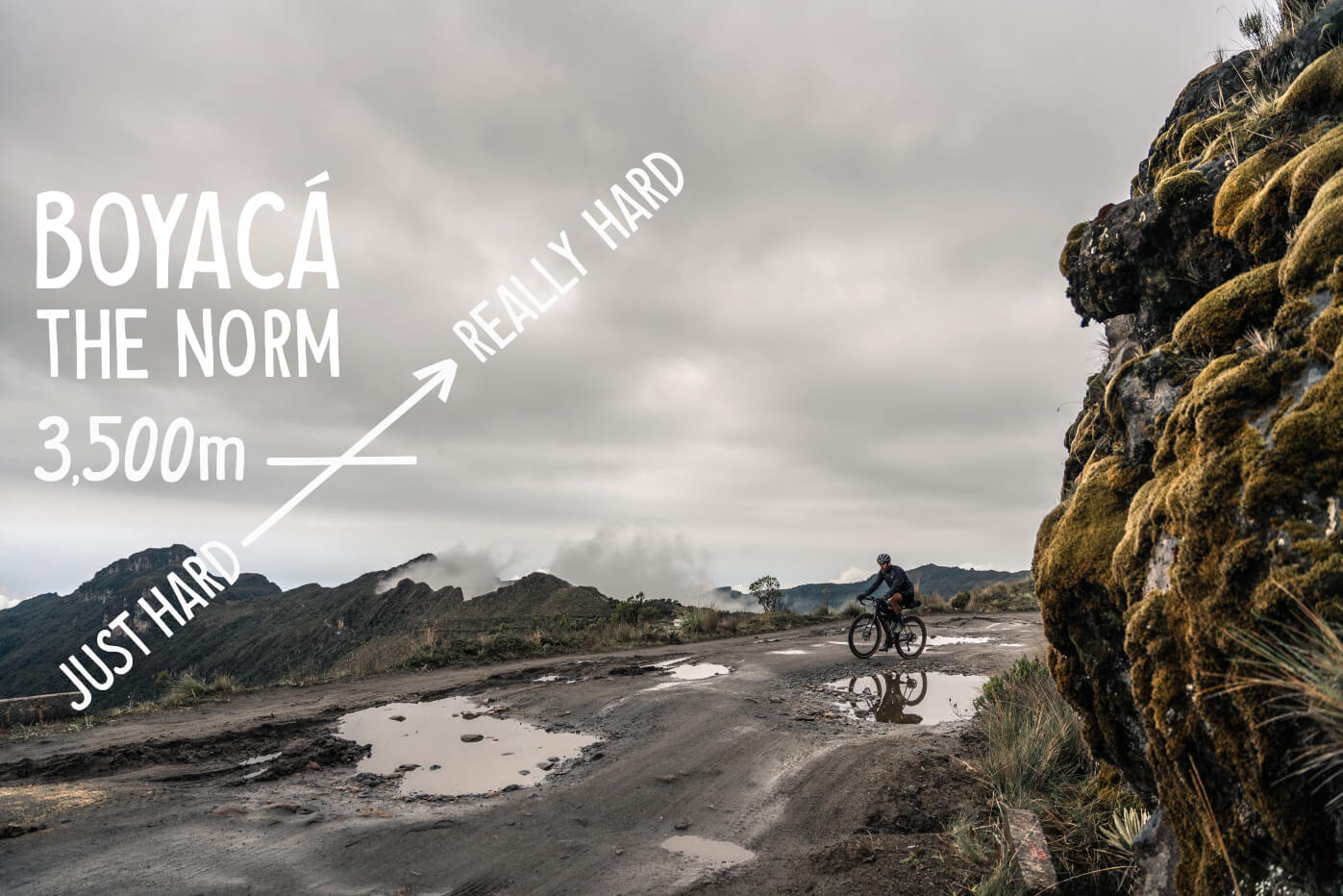 Where riding above 3,500 metres is routine

Full disclaimer: I’ve done a lot of bikepacking and tested myself above 3,000 metres in several countries (Colombia, Peru, Tajikistan, Kyrgyzstan and China). In my experience, it only starts to get really hard once you’re above 3,500 metres… What I was about to discover was that in Boyacá, climbs like this are routine. 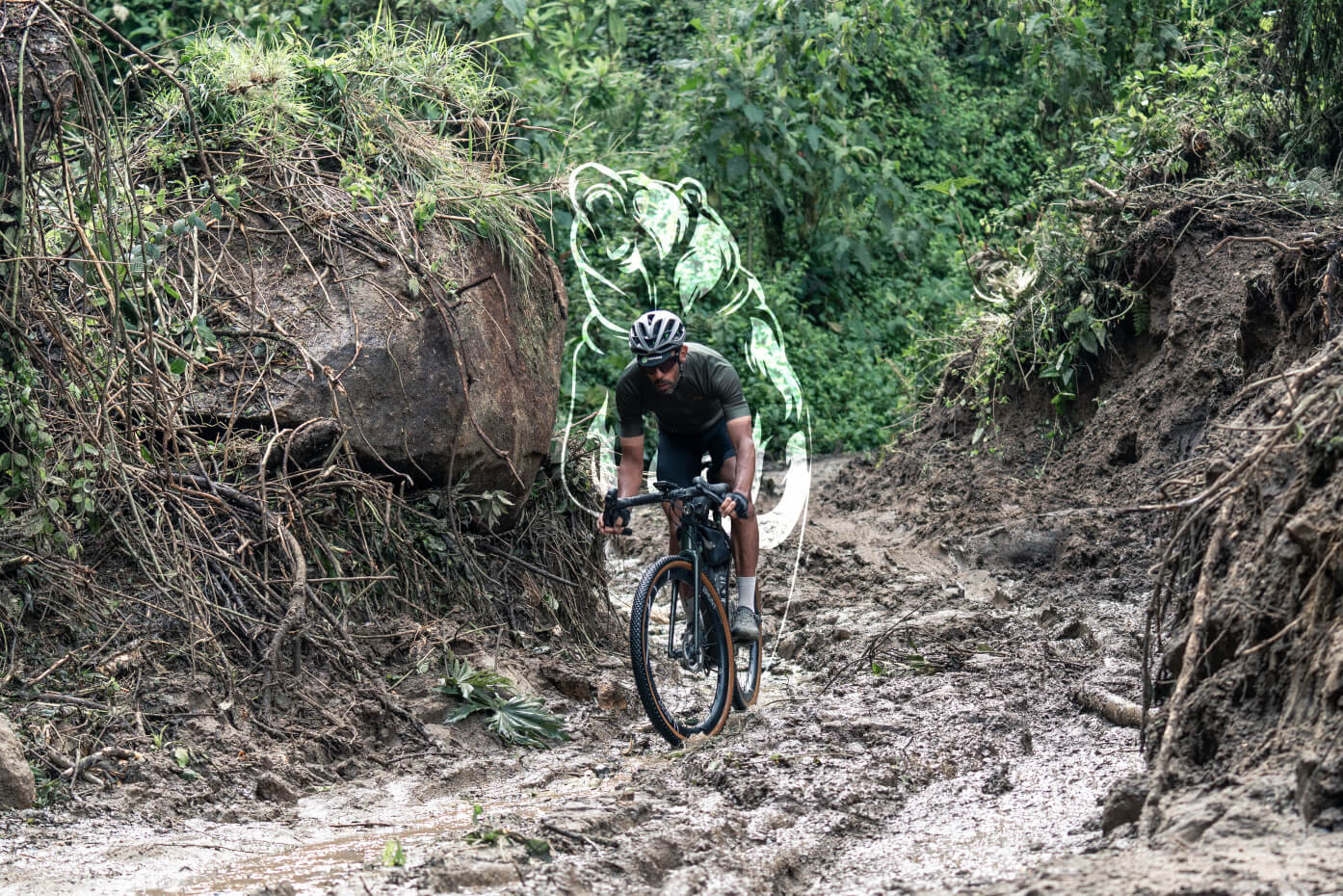 But it wasn’t just the altitude that was going to be challenge. This departamento had more in store: Rain, broken roads, scarce resupply options, and bitterly cold temperatures... Riding here is no joke. When I think back to my stint in Boyacá, one brutal stage sticks out: Paipa to Belén, 98 km, 3,200m of climbing and two passes above 3,800m. The double-track gravel road, which really needed some upkeep, was only passable on two wheels due to the many landslides and a few tricky river crossings. After close to 8 hours in the saddle, I arrived in Belén in the dark, feeling wet, cold, and exhausted, but most of all satisfied that I had completed such a beast of a ride. When I stopped my GPS, my average speed made me do a double-take: not even 13km/h.

The next day I reached the highest point of my journey at 4,200m of elevation, somewhere between the villages of Chita and El Cocuy. At this sort of altitude, you get to see páramo, which is a fairly unique ecosystem that only exists in Colombia and Ecuador. This high mountain tropical vegetation is like nothing I've seen before – look out for the frailejones, these great bush-like, tree-trunk-esque plants formerly known as espeletia have an enormous flower on top. 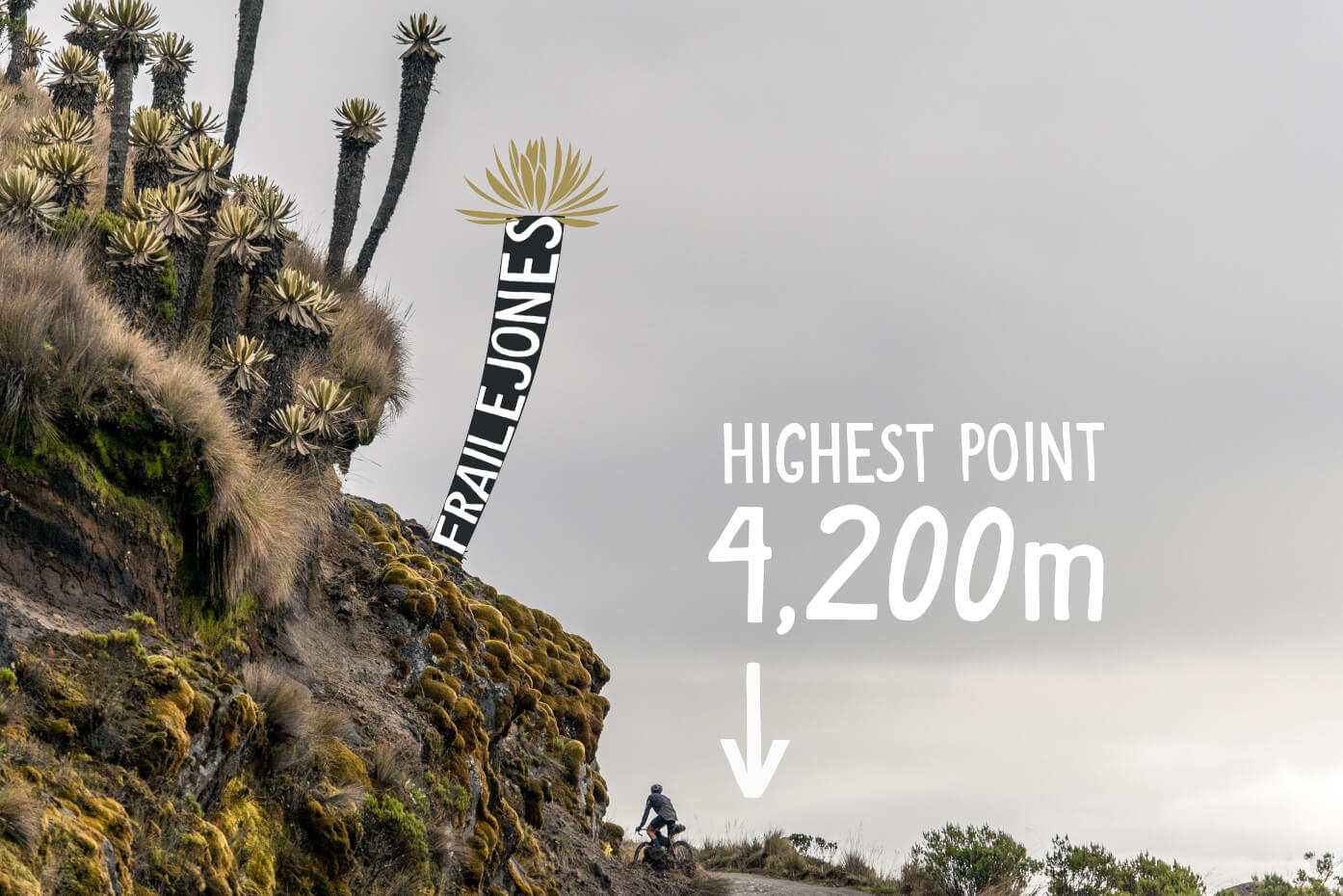 The central mountain range and Medellín

Colombia is a huge country, but there’s a huge chunk of it in the eastern part that is almost devoid of people. The flatlands of the east – covered for the most part by thick Amazonian forest – are considered a foreign land by the vast majority of Colombians who happen to live in the Andes mountains. Speaking of the mountains, you can separate these into three different ranges that run vertically through the country. I first explored the eastern one, where Bogota and Boyacá are, before heading to the central one, home to the famed city of Medellín.

From the cold and misty páramos to the hot and humid plain that lies between the two ranges, the change in climate was brutal. I elected to ride a day and a half on flat paved roads after a very demanding first week. While certainly faster and smoother-rolling, the scorching temperature made sure it was no walk in the park. I was quickly learning that no matter where you are in Colombia, the country will always find a way to make your day interesting.

A day after leaving the plains, I made it to the vibrant city of Medellín. Once an infamous stronghold of the narcos, it has completely reinvented itself, becoming not only a safe place but one of the most exciting cities in South America, with a great foodie scene and bustling nightlife.

Not for me though, not this time: I had big plans for my stint in the central mountain range. I went south from Medellín, surprised to find paved secondary roads at first, before finding my way back onto my usual regimen of fairly rough gravel roads. In terms of altitude, the departments of Antioquia and Caldas were easier than Boyacá, with climbs topping out at 3,000 metres. But what I had on the menu was sure to quench my thirst for giant climbs.

After reaching the town of Salamina, I veered east to go back to the flatlands, dropping as low as 500 metres to the busy town of Mariquita. About 30 km from Mariquita stands the ghost town of Armero, which was destroyed by a tragic eruption in 1985 that killed more than 20,000 people. From Armero, the paved road goes up to Murillo at 3,400 m of altitude. Once there, the pavement disappears and the road meanders all the way to 4,100 m. One of the longest climbs in the world, this lesser-known route to reach the Nevado del Ruiz volcano is the gravel alternative to the very famous Alto de Letras.

A long day in the saddle

After spending some time in the ruins of Armero which stand as a memorial to the victims of the eruption, I started an ascent that would take me all day. Even though I set off early, it was already fairly hot. Thankfully, one hour and roughly 600 metres of elevation later, the temperature was much more pleasant. I climbed steadily, passing the town of El Libano and the village of Padilla, seeing the vegetation slowly change, with mango trees giving way to big coffee plantations, and blues skies transforming into menacing clouds. The higher I got, the fewer people I saw. With a gradient of around 6%, the difficulty of this climb resides in its length rather than its steepness. After Murillo – where the tarmac disappears – the gravel started to get pretty rough. At an elevation of 4,000 m, the road flattened off for approximately 20 km and I spent an hour or so riding at this dizzying altitude. I stopped for a few minutes in an incongruous-looking shack, where a man offered me a glass of Agua panela, a hot drink made from water and sugar cane juice. It’s hard to image the remote and solitary life he must live here, catering to the odd cyclist or motorbiker.

After dropping 500 metres in elevation, I finally reached the end of this stage: the hotel Termales Del Ruiz with its natural hot spring pool. Having done 4,300 metres of climbing in just 100 km, this was the best welcome I could have hoped for.

All-in for a mythical ascent of La Linea

From one famous climb to the other, I only had one day of riding left in which to cross between the big cities of Manizales and Pereira on gravel tracks. I planned to finish the Colombia trip with a mythical ascent of Linea. On paper, it looked like business as usual. Leaving from the popular tourist town of Salento, the road climbs 20km to reach 3,000m, before a series of ups and downs on the approach to Ibagué, another big city. At first everything was going according to plan: the gravel climb out of Salento was one of the smoothest I'd encountered so far, and it only took me a couple of hours to reach La Linea.

Here's where things started to go downhill – both literally and metaphorically. The descent had apparently not been subject to the same maintenance as the climb, which meant I had a very bumpy ride all the way to the village of Toché, where I learned it would be impossible to get a warm meal. Oh well, the highlight of the day so far had been admiring Colombia’s national tree, a stunning palm tree that’s extremely tall and slim and grows profusely nowhere else but here.

From Toché, the climbing got real. Hardcore, even. Not super long, but very steep on broken roads and under the heaviest imaginable rain. The streams were overflowing within minutes, making the road feel unpassable until a daring local on a small motorbike took his chance and succeeds. The road condition got progressively worse, and this final day ended with a fiercely abrupt 2 km climb and an average gradient of 14%. When I reach the paved road that leads to Ibagué, I was on the verge of a nervous breakdown.

While not quite the majestic ending I’d hoped for, it’s given me another reason to go to back to this intense country with its endless mountains, ever-changing weather, high altitudes and seemingly infinite gravel possibilities. Most of the riding left me battered and bruised but by the next morning I’d wake up feeling hungry for more: more stunning views, more unique landscapes, more solitary unpaved roads. If you don’t mind roughing it, Colombia is a true gravel paradise. I boarded the plane back home knowing that it wouldn’t be my last visit.

Check out the route on Komoot →